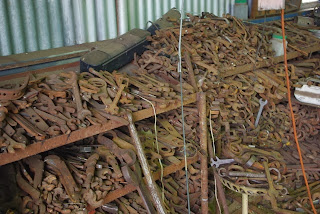 Over the last few weeks a number of people, friends mainly, have sent me emails regarding John and his amazing works in sculpting with spanners. I did a web search and found John doesn't have his own site, however I did find this document below which gives a pretty good insight into John's life and his works. The original PDF had John's phone number and still does though I have removed it from here. 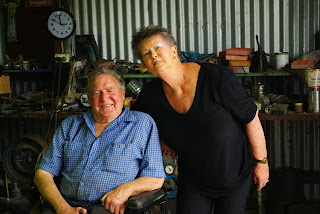 I gave John a call but he wasn't home at the time and so spoke to his lovely wife Sonia who advised me when to ring. Last night I rang and had a great chat with John who has allowed me to post about him here.  Rather than put him through a phone interview I explained about the document I had found, he couldn't recall this interview The original link is the title.


John Piccoli (known colloquially as ‘The Spanner Man’) still lives on the family property at Barraport  in the Boort area near Bendigo in Victoria. His grandfather Esias Piccoli (who came out to Australia from Switzerland) selected the land in 1876 and named it ‘Bryngoleu’ – which is a Welsh name for “view from the hill”. As you drive into the property there is a collection of old farming machinery on either side of the road. John says that he has an example of every machine used for farming in this area dating back to the late 1800’s.
John was born in 1941 and when he was eight years old contracted Polio, after which he went into hospital. Three years later he came out. As you can imagine, he had a pretty torrid time, with the  treatments for this disease available at the time. It also meant, unlike today, that he had noschooling during this time and he found it hard to catch up; so, like many people of his generation, he is mainly self-taught.
John’s father passed away when he was eighteen and despite all the setbacks he had endured,John recovered sufficiently to be able to run the family farm with the help of his mother.
One of his passions is a love for animals and birds and all of his life he has had pet birds. StudDorset Horns and Stud Poll Dorset sheep were bred. He also had turkeys, squab pigeons, Wagyuand other breeds of cattle, deer, goats, ostriches, camels, pheasants, peacocks, Guinea fowl,finches, various breeds of ducks (including Mandarin and Scaup), different kinds of quail and alsomeat rabbits.
In 1993 John obtained two pairs of Macaws from the first legal shipment that came to Australia. One pair was green wings and the other was blue and gold. He now has 12 Macaws and owns one of the best breeding collections in this country (including some rare colour variations which are sought   after). These are magnificent birds and several of them will talk to you.
John says that he had always done a lot of welding. It is something that he finds easy to do and enjoys. He has a good workshop on the property and has accumulated tens of thousands of spanners over the years. In the early eighties he began making his garden sculptures using these spanners that he welds together in three-dimensional shapes. His first masterpiece was a coffee table, then two of them, then garden seats and now life-sized animals. Because he was using up his spanners so quickly, he then had to start buying more, which he still does today.
John’s rusty sculptures are rather like iron lace pieces. He gets a photo of the animal or whatever it is he wants to sculpt and then creates a piece from that. He visualises in his head how he is going to do it and then proceeds without the use of drawings. Because he is now confined to a wheelchair, John works mainly on the ground and manoeuvres the pieces around with the use of ropes and overhead pulleys. It is truly remarkable how he does this.
With exhibitions in Melbourne at Manyung Gallery, the Gary McEwen Galleries in St Kilda, Southbank, the Artist Garden in Fitzroy and Darling Harbour in Sydney, John is becoming very well   known for his work.
‘Bryngoleu’ garden is a lovely setting for John’s sculptures and because it is quite large, gives a lovely canvas to be able to show them off to their best advantage. On the day I visited I saw many wonderful pieces, including a bull with huge horns, two fighting horses and a swordfish (all full size).
John’s latest creation is a bucking bronco with a cowboy on his back.
It was a pleasure to meet John when I visited his property in May 2009. He is a truly amazing man and an example to us all in what you can do to overcome adversity – a true genius in his own field.
If you happen to be in the Boort area, it is well worth contacting John to see if you can visit his property and see his wonderful sculptures.
The background information on John and his family was supplied to me by Paul and Cathie Haw, for which I thank them.

In speaking with John I asked about his system for getting up to create the sculptures, he doesn't!!
He has a double cross over gantry and block and tackle system which brings everything to his level. Now when you consider these works are all 3rd he has got to have an eye for great detail producing the end results.
Its obvious from my web search (also try an image search "The Spanner Man") that many people have visited John and Sonia as they have Blogged or created albums in Flickr or on Forums. Media has also highlighted John and his work as well as his medical condition The City Journal has a video, ABC Rural even Auto Clubs  and Facebook spread the word.

Below are some of the photos which landed in my inbox I hope one day we (Sue and I) can get down a visit John and Sonia. 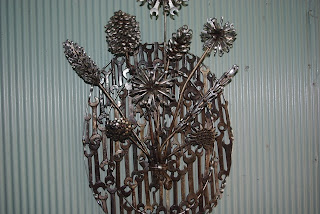 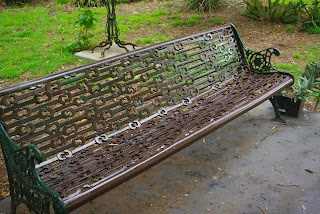 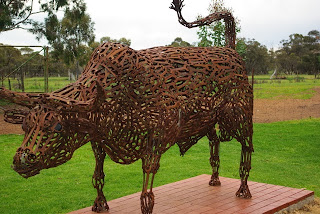 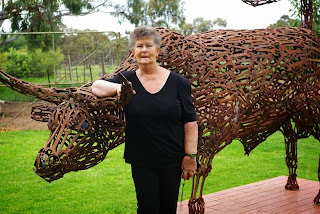 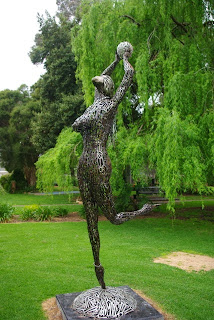 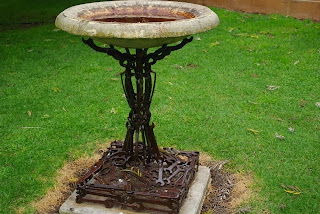 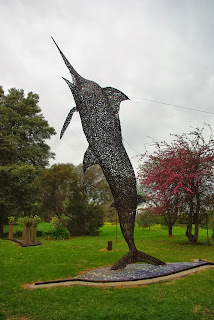 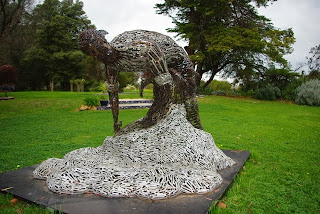 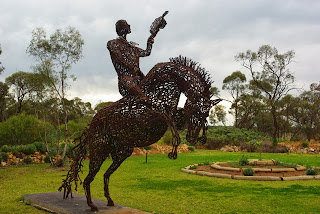 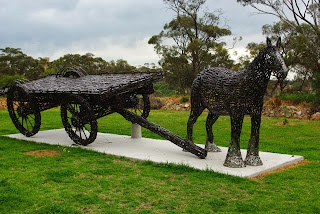 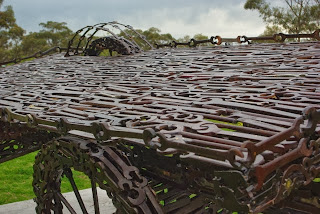 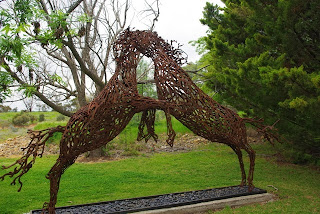 Posted by Raymond Sanderson at 14:19